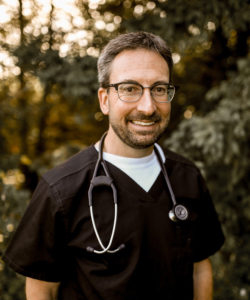 Gregg graduated from the Ontario Veterinary College at the University of Guelph in 2008. He began his career working with animals at the Avicare Wildbird Rehabilitation Centre in 1997 and later became a kennel assistant at the Bowmanville Veterinary Clinic. After graduating from the Veterinary Technician program at Ridgetown College in 2000, he decided to pursue his education further, by enrolling in the BSc Animal Biology program at the University of Guelph. In 2004, Gregg was admitted to the DVM program. Gregg has practiced in both large animal and small animal clinics in Belleville, Trenton, Whitby and Oshawa. He joined the team at Port Hope Veterinary Hospital in August 2019. In his spare time, Gregg enjoys hiking, biking, running, and photography. He also volunteers as a marksmanship instructor with 151 Chadburn Squadron, Royal Canadian Air Cadets in Oshawa. Gregg currently resides in Newcastle with his wife and their very spoiled cat, Tally.